Debora received her BA in Sociology from Hofstra University and is a Board Certified Assistant Behavior Analyst. She serves as the Executive Director and Founder of The ELIJA School, Founder of The ELIJA Foundation, the ELIJA Farm, and ELIJA's Transition Program and Services (TPS). Debora has volunteered her time to numerous Autism groups such as Nassau County’s Department of Health Early Intervention Coordinating Council, New York State Association of Behavior Analysis, Nassau County Autism Coalition run by the County Executive and served as a board member of The Behavior Analyst Certification Board® (BACB®) for 5 years. She was appointed to the New York State Licensure Board for Applied Behavior Analysis in 2014 and served until 2018, when she stepped down to advocate for the advancement of the field in ABA. For the past 18 years, she has been providing advocacy to families and conducted training workshops to promote evidence based instruction for families and educators who have been touched by Autism. She has a 20 year old son with Autism.

Husband and wife team, Lawrence Foglia and Heather Forest, have lived and worked together at Fox Hollow Farm for over thirty-five years. They have been instrumental to ELIJA Farm's CSA and educational programming. They served as the agricultural consultants to ELIJA Farm, which was the former Fox Hollow Farm, the Foglia family's farm. Larry Foglia
Lawrence Foglia holds a Masters Degree in Environmental Education and Natural Resources. For the past fifty years, he has been agricultural director of the Foglia Family’s Fox Hollow Farm, where he diligently nurtured the biology of the soil and has conducted a wide range of horticultural and agricultural enterprises.

He is a founder and an executive committee director of the Long Island Community Agriculture Network (LICAN), a Citizen’s Action Program responsible for the construction and development of local school and community gardens including the award-winning Gateway Community Garden in Huntington Station, NY, the Jack Abrams STEM School Garden, Huntington, Commack High School Garden, Commack, and the ELIJA School Garden, Levittown. At the Usdan Summer Camp for the Arts he founded and, for over fifteen years, supervised the Nature, Ecology and Design Program. Affiliated with the North Shore Land Alliance, he helped organize and implement two successful Small Farm Education Conferences on Long Island. On the advisory committee for the Long Island Nature Collaborative for Kids (LINCK) he helped organize the LINCK Nature Conference and advocates for the building of Island-wide Nature Explore Play Areas for young children. As a respected farmer and land conservationist, he has served as a consultant to both the Peconic and Nassau Land Trusts. He has helped to preserve farming, farmland, and natural areas on Long Island including Grossmann Farm, Malverne; Carpenter Farm, Huntington; Rueck Farm, Old Westbury, Valentines Farm, Brookville; and the Castelnova Farm, Orient.

As LICAN garden educators, he and his wife, Heather Forest, have developed and presented garden education programs in underserved communities across Long Island with funding from the Long Island Community Foundation, The Horace and Amy Hagedorn Fund and the Litwin Foundation Fund. 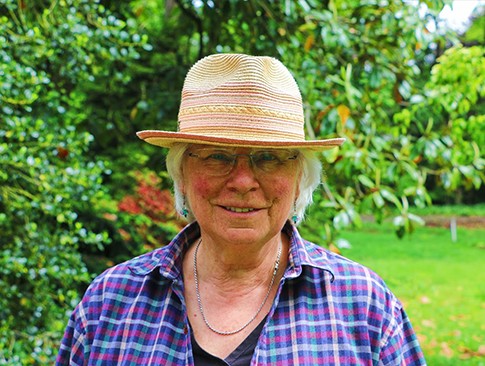 Heather Forest
Heather Forest is a founder and an executive committee director of the Long Island Community Agriculture Network (LICAN), the Citizen’s Action Program responsible for the construction and development of the Gateway Community Garden in Huntington Station, NY. Funded by the New York State Council for the Arts, Heather directed the award-winning educational mural project at Gateway Garden. She conceived and directed LICAN’s Grow to Give Community Service Garden Program in which ten Huntington, NY area churches and synagogues repurposed their congregational lawns as vegetable gardens tended by congregants who then donated the produce they grew to local food pantries. With her husband Larry Foglia she established and managed the Fox Hollow Farm CSA which grew produce for one hundred local families. She directed Fox Hollow Farm’s agricultural education division offering a wide range of community workshops on homesteading and organic gardening topics. As well as being a farmer and an organic gardening educator, Heather holds a PhD in Leadership and Change from Antioch University. She is founder and executive director of Story Arts, a Huntington based cultural arts organization and is an award-winning storyteller and children’s book author. Her repertoire of world folktales has been featured at storytelling festivals and theatres internationally. She has been awarded the Circle of Excellence Award from the National Storytelling Network and has been a Fulbright Senior Specialist in the Humanities.